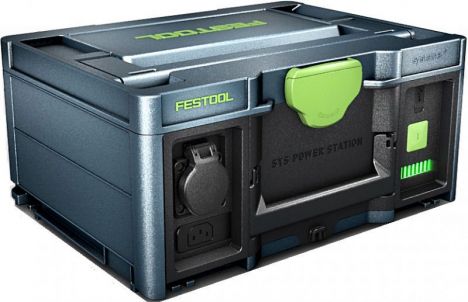 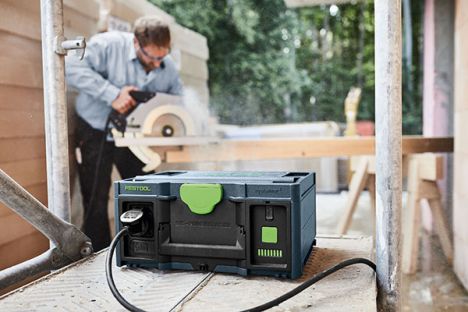 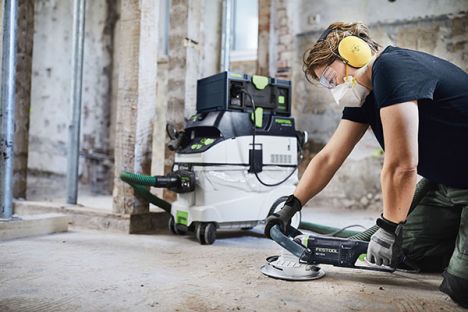 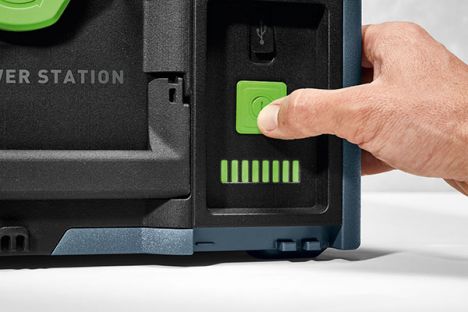 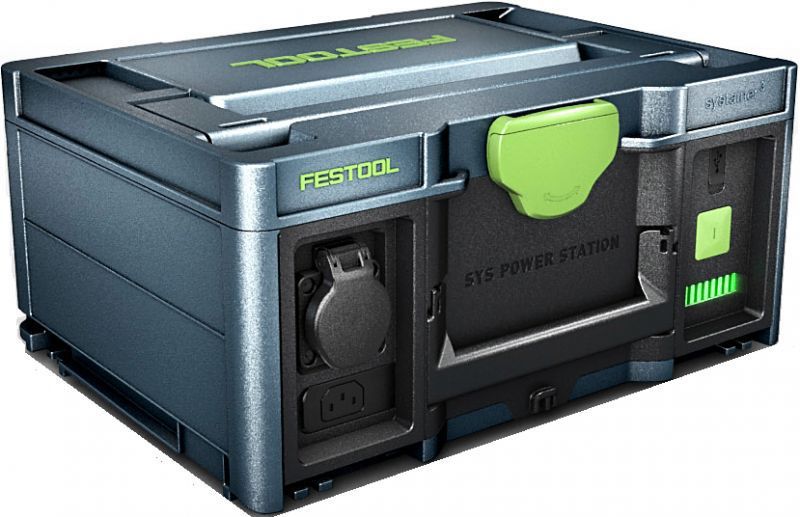 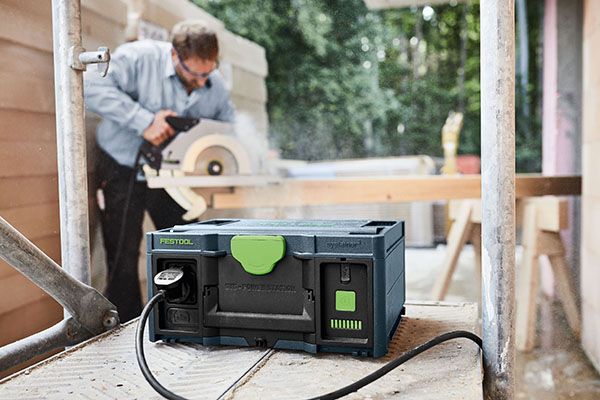 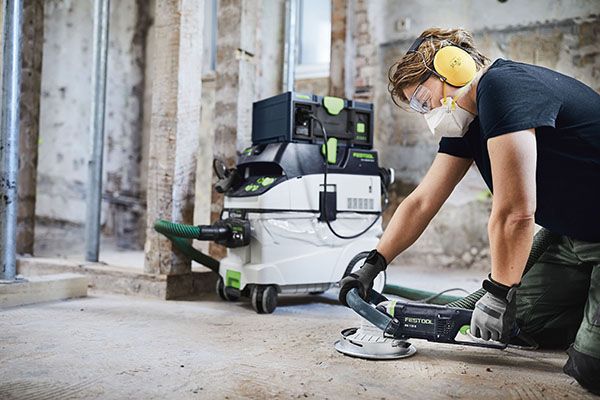 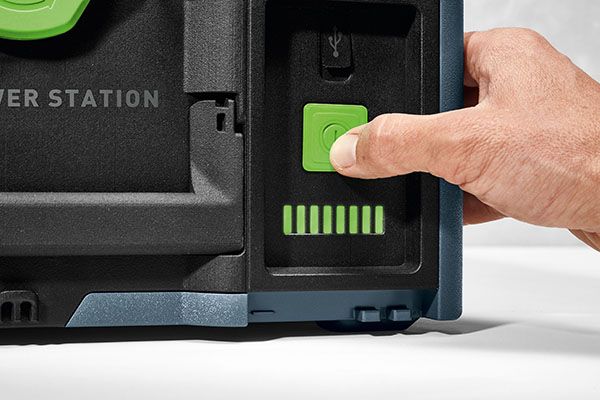 Power as good as from a socket.
Free yourself from the constraints of electrical sockets with the new Festool SYS-PowerStation from Brighton Tools

Picture the scene:
You go to the building site and you have enough power for an entire day's work in the latest generation Systainer format – robust enough for the rigours of a building site – enabling you to work without interruption, even when there's no power source on site or within reach.
No longer is this the stuff of make-believe – it's now reality thanks to the new SYS-PowerStation from Festool.
Boasting 1500 watt-hours, a full 3680 watts of continuous power output and a top power output of up to 11,000 watts, the portable energy storage device delivers a reliable 230-volt mains voltage that lasts.
In other words: Used with the Kapex KS 60 sliding compound mitre saw and added mobile dust extractor, you can complete 560 cross-cuts, enough for a parquet floor. With the Planex long-reach sander and connected mobile dust extractor, which are also mains-operated, you could even sand a 200 square-metre surface.

Work whenever you want, wherever you want, with whichever mains-powered machine you want.
The SYS-PowerStation puts an end to those cumbersome lengths and lengths of cable and the constant search for power sockets, keeping you supplied with power at all times wherever you go.
The result: Mains-operated power tools can be used more flexibly, making them effectively portable.
The new SYS-PowerStation is also compact and portable, and stores up to 1500 watt-hours of electricity.
That is equivalent to the energy supplied by 20 battery packs.
As such, it has enough energy for a full day's work without mains power, making users completely independent of traditional power sources, such as sockets, site distribution boards or generators.
In contrast to its predecessor, the new SYS-PowerStation stands out for its zero-emissions operation.
This means it is silent and produces no harmful fumes when in use – making the SYS-PowerStation better for your health and the environment, as well making it ideal for use indoors.
Then there's the comparatively low weight: At 16 kilograms, the SYS-PowerStation measures only 50 to 70 percent of its counterparts' weight.
The portable energy supply comes in the ultra-compact Systainer3 format and is also splash-proof (IP44), making it robust enough for use on building sites.

Power as good as from a socket.
With 3680 watts continuous power and up to 11,000 watts short-term power, the SYS-PowerStation provides enough energy to power all mains-operated tools – even mobile dust extractors, large saws and hammer drills.
Its combination of high-performance capabilities and large power storage with compact design and comparatively low weight makes it a one-of-a-kind on the international market.
The SYS-PowerStation is not only compatible with all Festool corded power tools, but also supplies electricity to all mains-operated power tools from other manufacturers.
It powers these without any loss of performance – just like a standard 230v electrical outlet module.
In normal conditions, it takes 3.5 hours to fully charge the battery.
During this process the intelligent charging management system adjusts the charging strategy depending on the current cell temperature.
This minimises charging times while protecting the battery cells.
The SYS-PowerStation operating concept has been purposefully designed to be clearly organised and as simple as possible.
The mobile socket is intuitive to use via the front panel of the practical Systainer3 housing: Integral to this mobile socket are the ergonomic and centrally positioned on/off switch and the power connection for all* mains-operated tools.
Operators can easily see the current state of charge at any time by checking the integrated LED charging indicator on the front face.
There is also a second on/off switch inside the Systainer to prevent the device being accidentally switched on in transit.
Also located on the front and therefore easy to access is the USB-C port for quickly charging other portable devices such as tablets or smartphones.

Planning assurance on the building site